US coal exports dropped to a 33-month low in July, as fundamentals in overseas markets continued to erode.

Shipments fell by 34.6pc from year-earlier levels, to 6.49mn short tons (5.95mn metric tonnes), the US Census Bureau said yesterday. The last time coal volumes were lower was in October 2016.

Thermal coal led the declines amid weak international demand and competition from other countries. Volumes plunged by 41.6pc to 2.83mn st. That was the second-lowest level since November 2016.

Prompt two-month deliveries of 6,000 kcal/kg coal dropped to an average $56.43/metric tonne cif Amsterdam-Rotterdam-Antwerp (ARA) in May and $48.90/t in June, which were 40pc-50pc below year-earlier levels.

US coal held a premium to European markets as producers looked to other customers to make deals. Coal with 11,300 Btu/lb and typical 3pc sulfur out of New Orleans, Louisiana, would have landed in Europe at as much as $6/t above the generic cif ARA index based on Argus coal and freight assessments. The midpoint for lower-sulfur 6,000 kcal/kg coal out of the US east coast would have been $22/t higher than European markets.

But prices still were below profitable levels for US coal producers. And, after a brief uptick in July, markets have resumed declines, suggesting continued weak US exports in coming months.

Exports fell across all major regions of the globe. Only exports to Egypt saw any meaningful gains compared with a year earlier.

Thermal coal shipments of out Baltimore, Maryland, which are primarily Northern Appalachian coal, dropped to 407,826st from 969,907st. That was led by a 70pc decrease in exports to India, to 190,041st.

US coking coal prices were higher than year-earlier levels in May and June but had lost momentum from earlier in the year. Markets have continued to soften since then, with prompt 90-day shipments of low-volatile coking coal averaging $151.91/t fob Hampton Roads in August, compared with $170.80/t a year earlier and a two-year high of $204.70/t in December 2018.

The dual weakness of metallurgical and thermal coal exports dragged total shipments out of Baltimore down to 843,403st in July from 1.99mn st a year earlier. 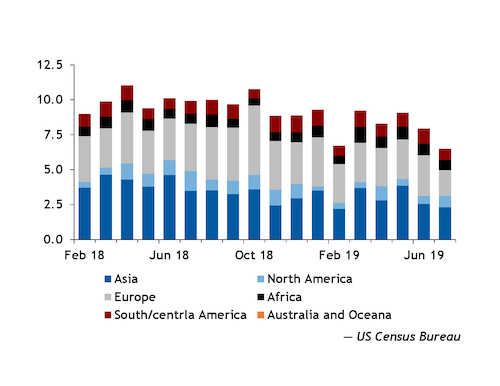 US rail agency to act soon on rate review changes