A total 7.49mn short tons (6.8mn metric tonnes) of coal left US ports in November, according to US Census Bureau data released today. That compared with 8.92mn st a year earlier and 6.43mn st in October 2019, which had been the lowest since October 2016.

Prices and demand stabilized in early October, opening some US markets up to spot shipments. But metallurgical prices have faltered since then, and thermal coal prices remain too low for many producers to make a profit.

Argus assessed prompt two-month shipments of 11,300 Btu/lb typical 3pc sulfur coal at $38.50/metric tonne fob New Orleans last week, roughly in line with where prices were three months ago and about $10/t below where producers typically start making a profit shipping this type of coal overseas.

US low-volatile coking coal prices, meanwhile, were assessed at $127/t fob Hampton Roads today, which is $3.25/t up from the 39-month low set at the end of December but still at least $8/t below assessments in October.

Steam coal shipments out of the US fell to 3mn st from 4.41mn st a year earlier. The decrease was entirely from bituminous coal and anthracite, which dropped to a combined 2.29mn st from 3.72mn st.

Asia was the only continent to have an increase in shipments coming its way. Thermal coal exports rose to 1.47mn st in November from 1.22mn st a year earlier, led by a nearly 58pc gain in shipments to India to 615,752st.

Other thermal coal exports to Europe dropped to a combined 733,715st in November from 1.93mn st a year earlier. Only shipments to Poland, Romania and the Ukraine increased.

Exports to European countries that were once strongholds for US seaborne thermal coal — Germany, Netherlands, Italy and the UK — all declined, US Census data show. No US steam coal headed to Germany or the UK in November, compared with 295,020st and 599,996st, respectively, a year earlier.

Steam coal exports to Africa dropped by 23pc to 335,634st as a drop in bituminous shipments offset the increase in lower heat content coal volumes. Thermal coal exports to the Americas dropped as well.

US metallurgical coal exports dipped to 4.49mn st in November from 4.51mn st. While shipments to Asia climbed to 1.24mn st from 1.07mn st, volumes to every other continent decreased.

Coking coal exports to Europe dipped to 1.77mn st from 1.79mn st. Decreases to other continents were more pronounced.

Metallurgical coal shipments to North American countries dropped to 526,455st from 622,180st. Volumes to Canada totaled 471,659st, which was slightly higher than in October but 5.4pc below November 2018 levels. 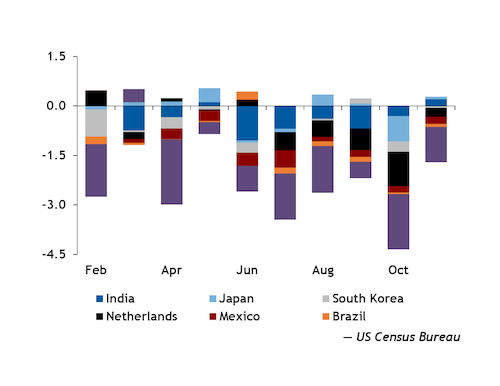